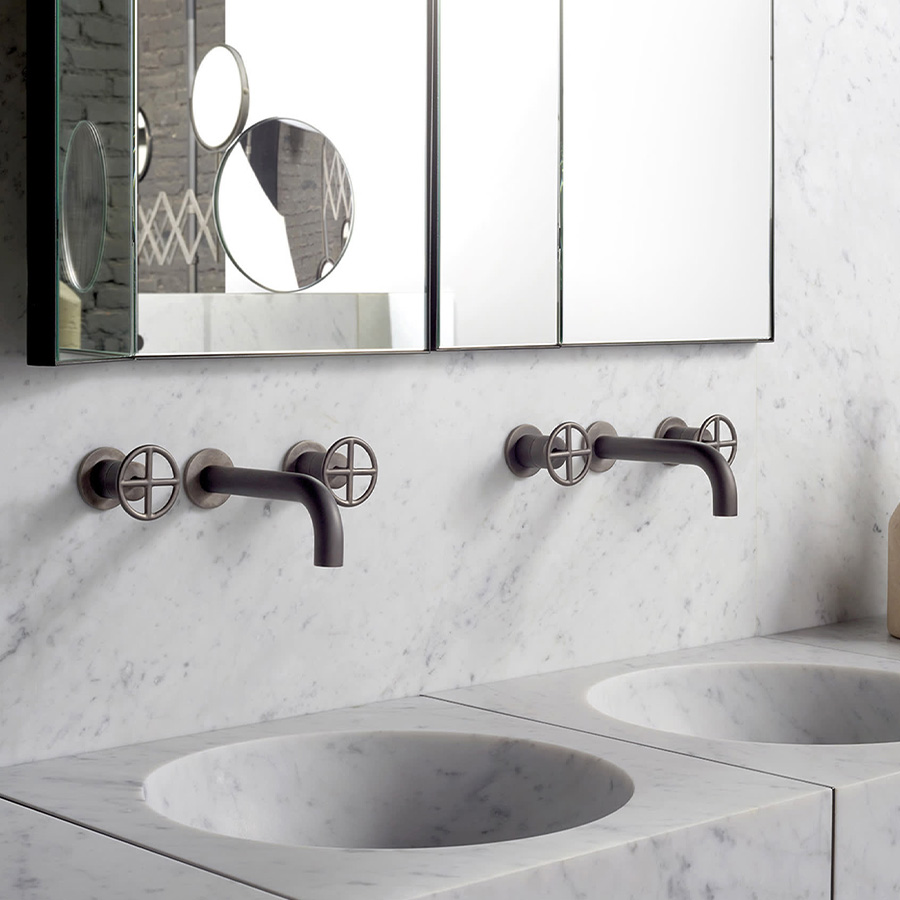 The project came about from research into archetypal forms translated into pure geometry and reinterpreted in a contemporary vein. A metaphor for the relationship between psyche and material, the dialogue between circle and square runs through the entire collection: the washbasin is a square marble block from which a hemisphere is extracted; the hemisphere becomes a bowl on a rectangular plane, slim as a sheet, the radii of the sphere become the taps. 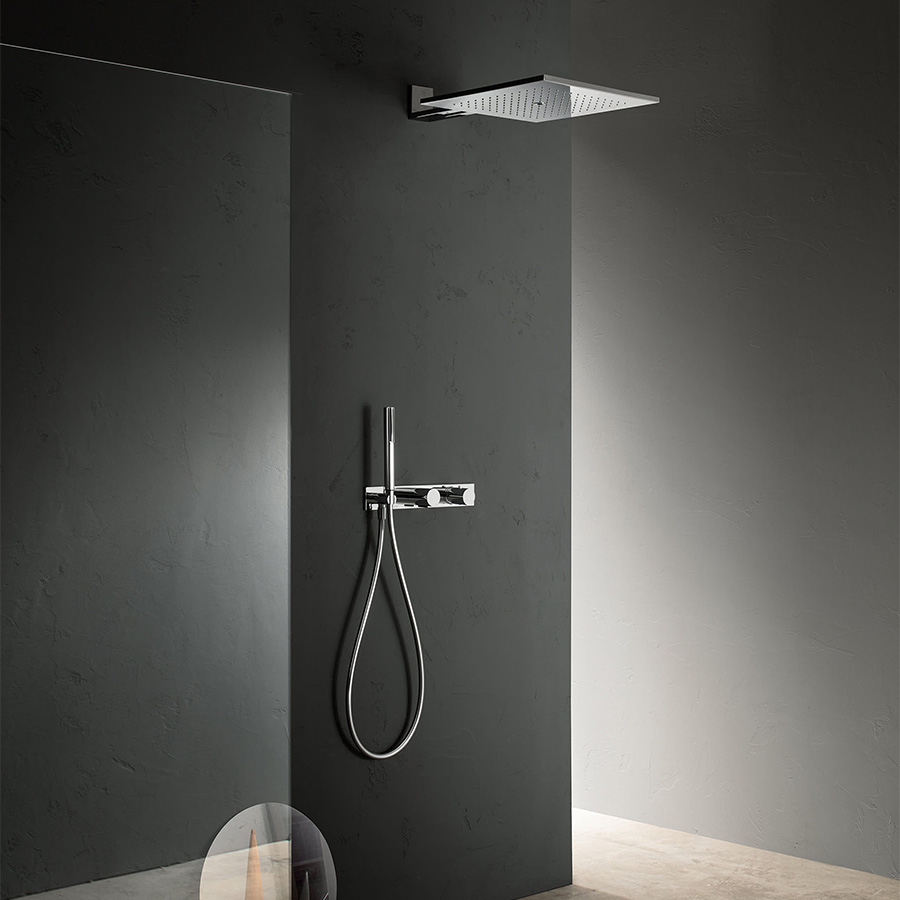 This is a collection of multi-purpose showers starting with elementary components – planes and square and rectangular lines – that are composed of multiple forms and give the finished product a sense of extreme lightness. 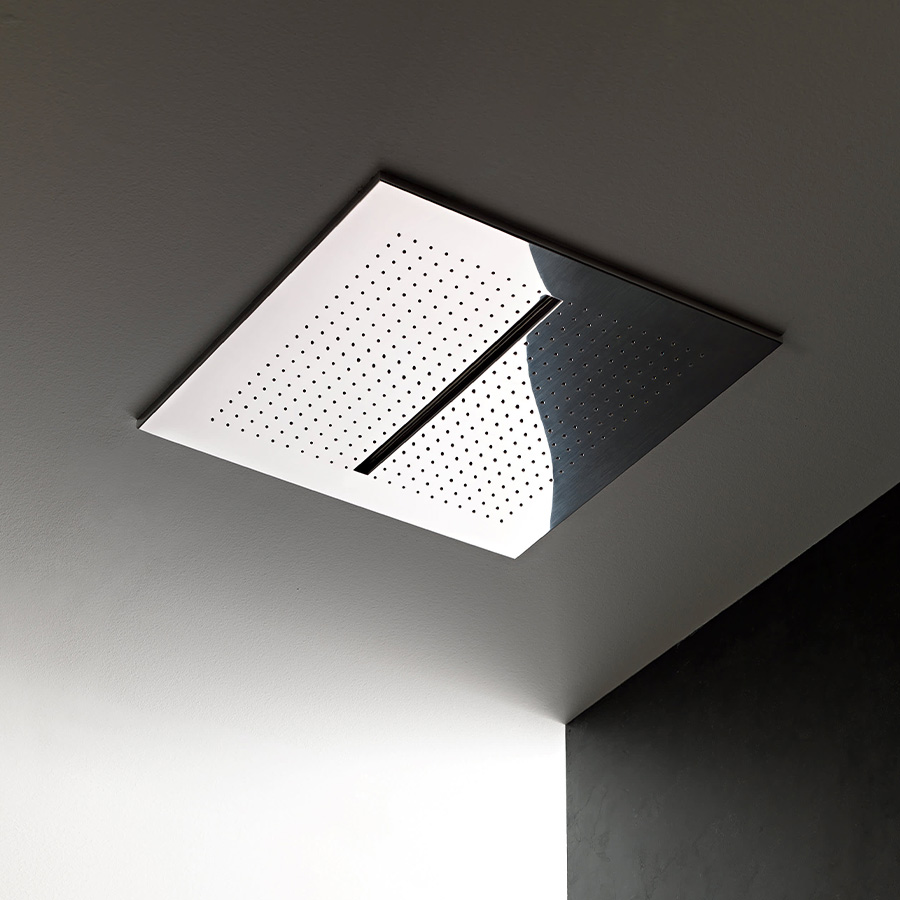 The ceiling shower heads with Acqua Zone rainwater and waterfall and electronic controls and six different moods of water and Acqua Zone Dream lights offer water and light games to envelope the person. The agreeability of the shower moment is illuminated with the colour of the emotions. 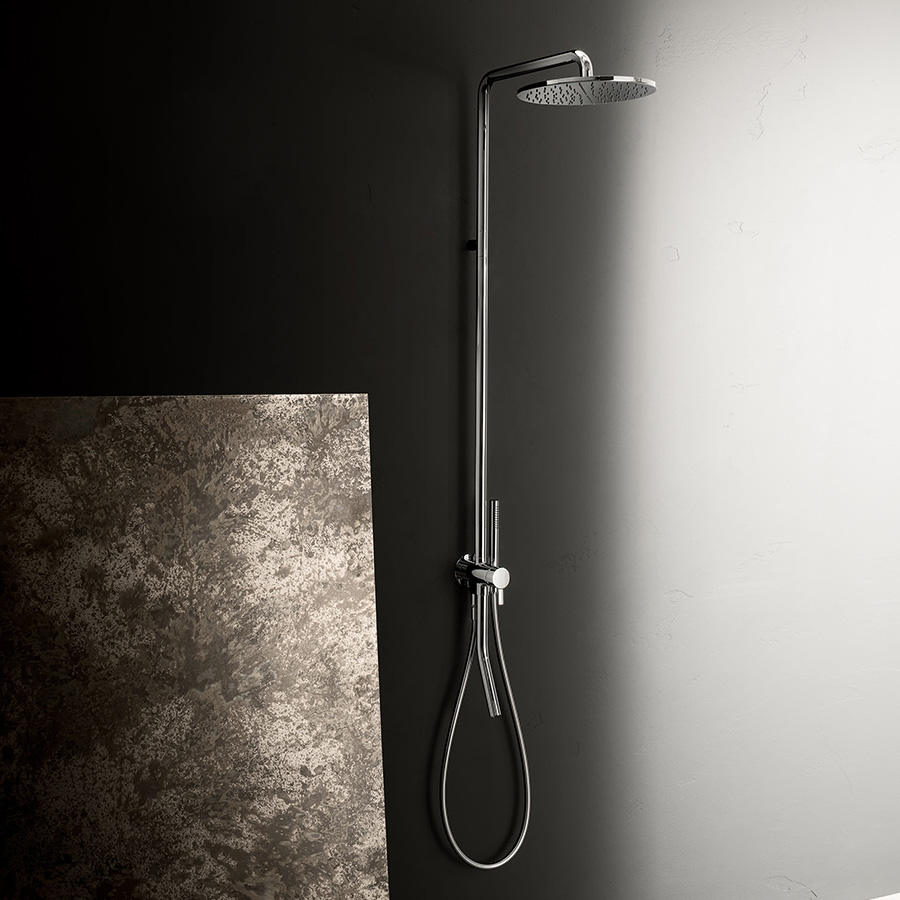 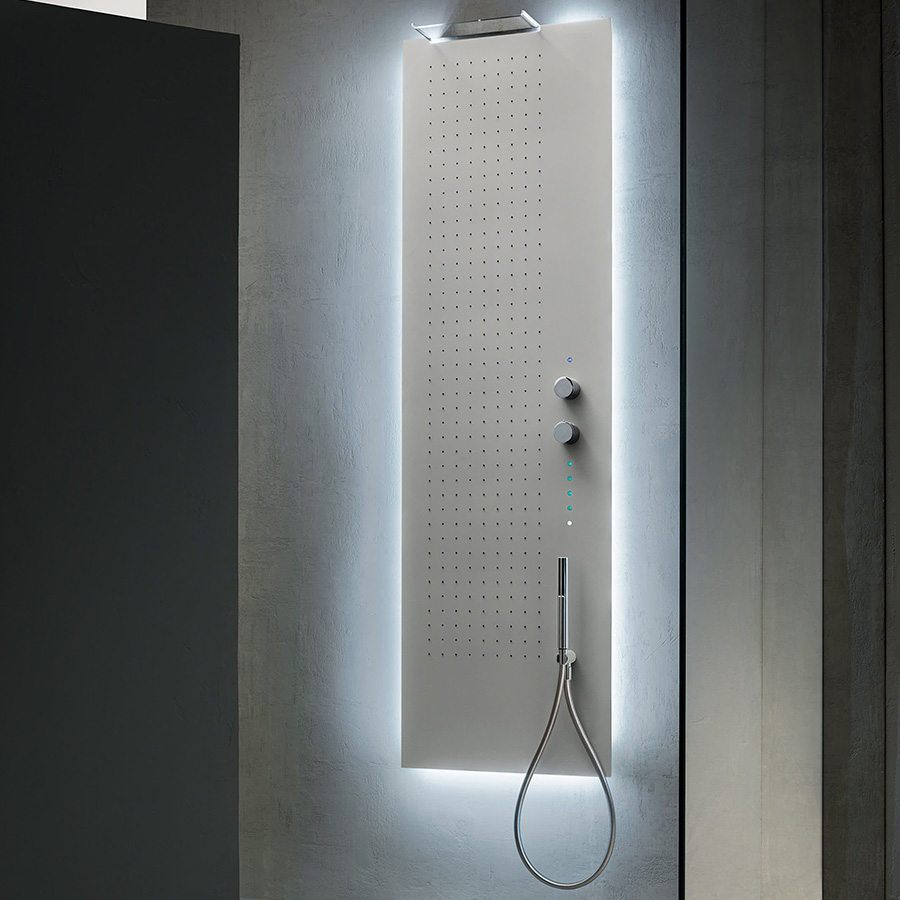 Rarefied, abstract, almost a graphic outline, Acquapura wall is a thin horizontal suspended plane floating on light. A project with a highly scenographic component, Acquapura self-standing is light transformed into water, an architectural volume that delimits the space. 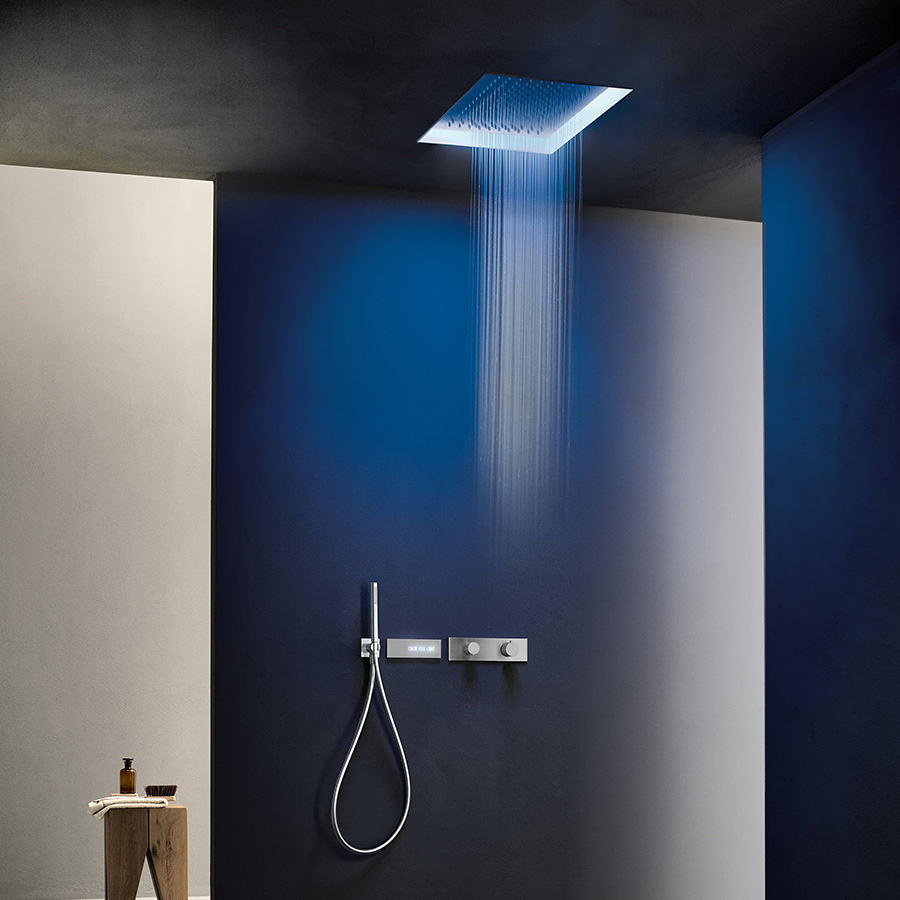 Acquafit is a multifunction and multisensory shower, available both inthe square and the rectangular version, for ceiling installation, madeup of built-in piece, partially built-in piece and external piece. It featuresan innovative high-performing double rain function, with anti-limestonenozzles and a tonic water function. 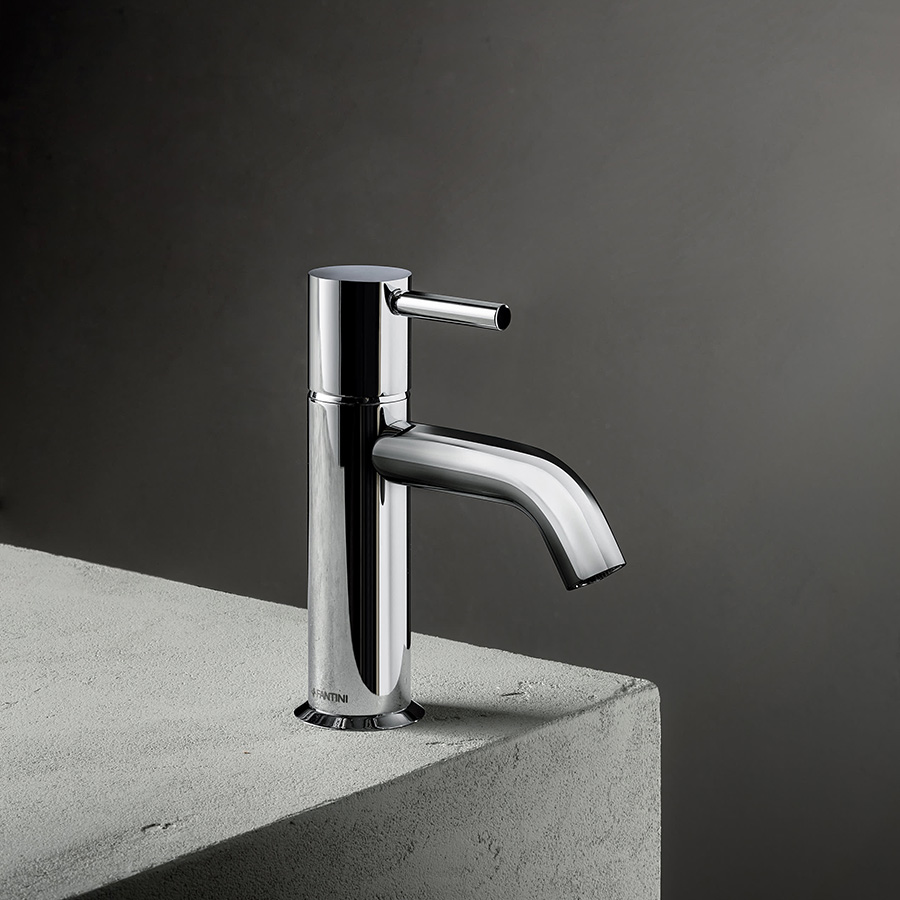 The Nostromo mixer surprises with its formal rigour, achieved by means of a design approach based on subtraction in order to arrive at the essence of function. 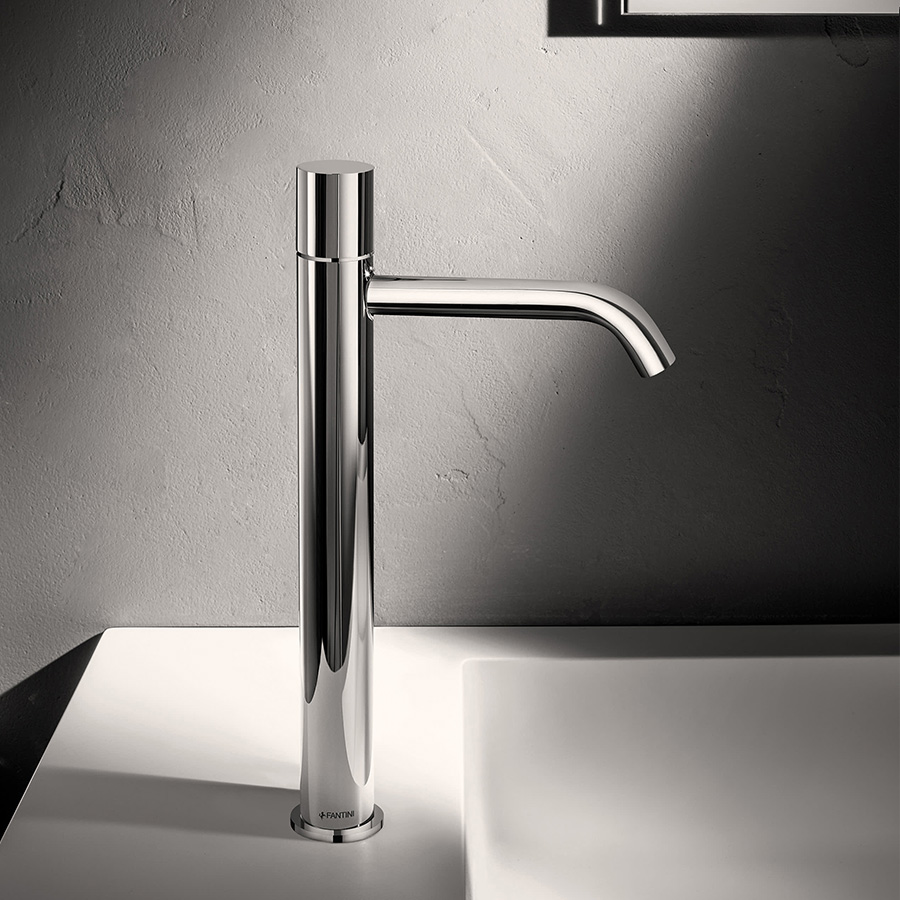 Nostromo Small brings out the designer’s choice to create by subtracting material so as to achieve a pure essence. 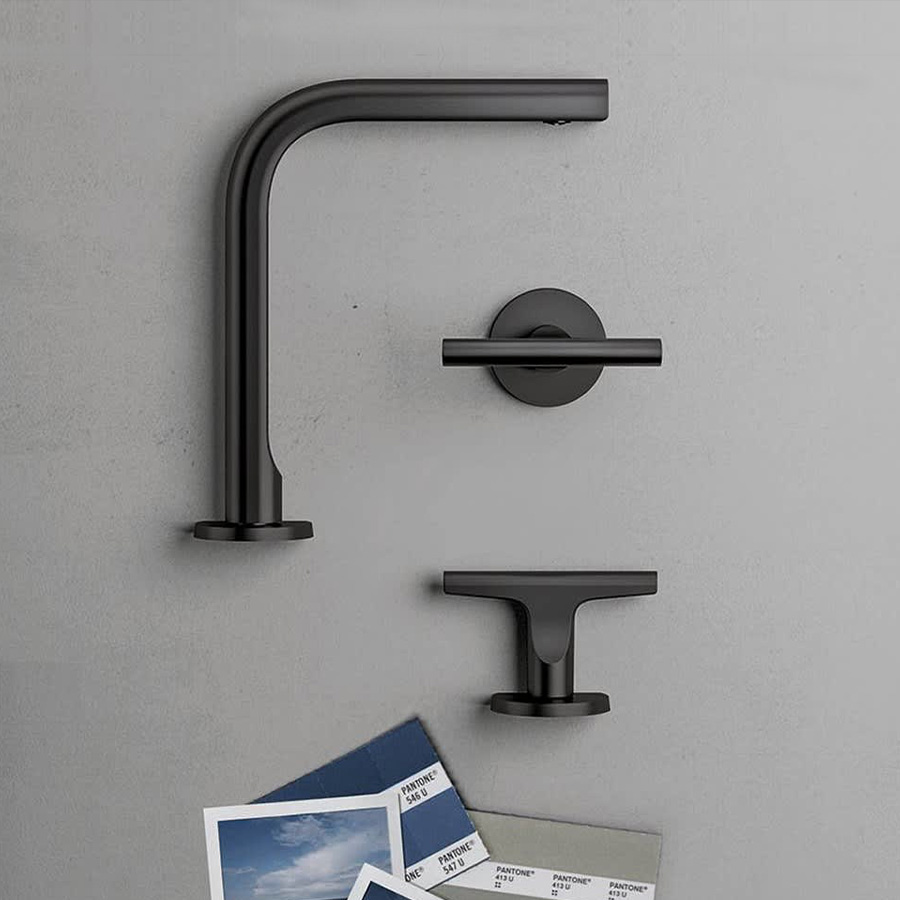 The shape of Sailing clearly refers to the world of water and Lake Orta, Genius Loci of Fantini, through the poetic reinterpretation of the clear lines and volumes of bollards, the most common form of boat cleats, which are essential and useful elements for securing boats by rope. 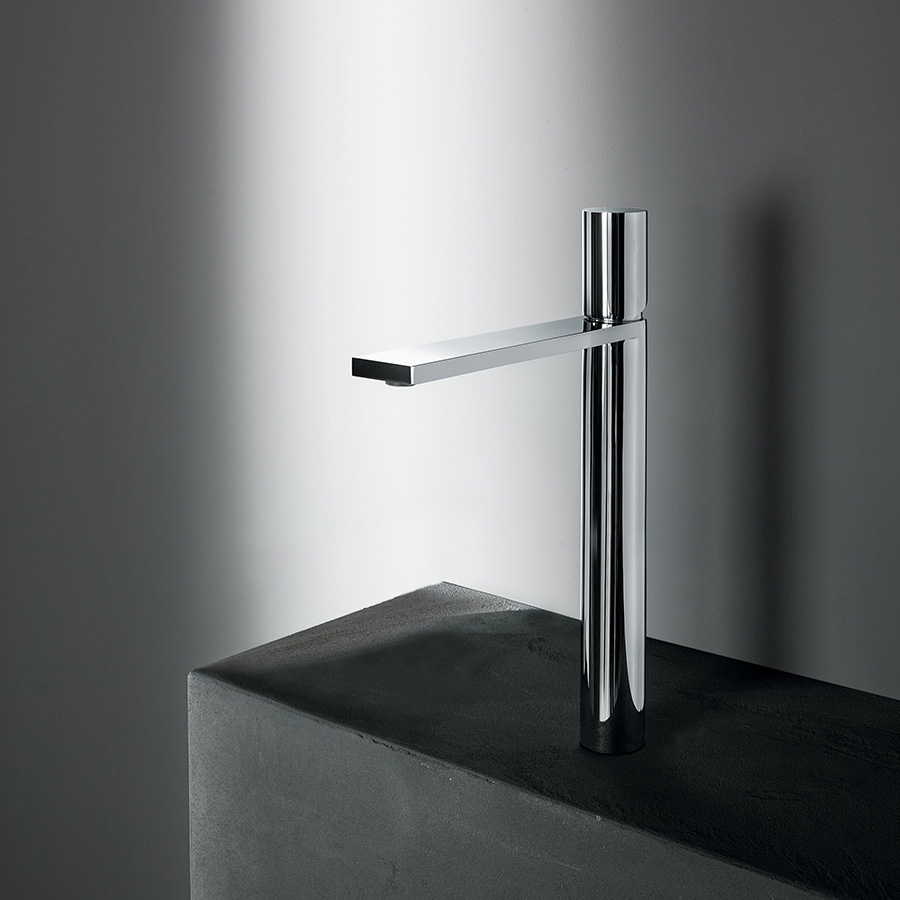 This is one of the most important product setting the standard in the world of taps and fittings, a contemporary form that has become a classicmodern icon, also in the brushed stainless steel version, unalterable over time. 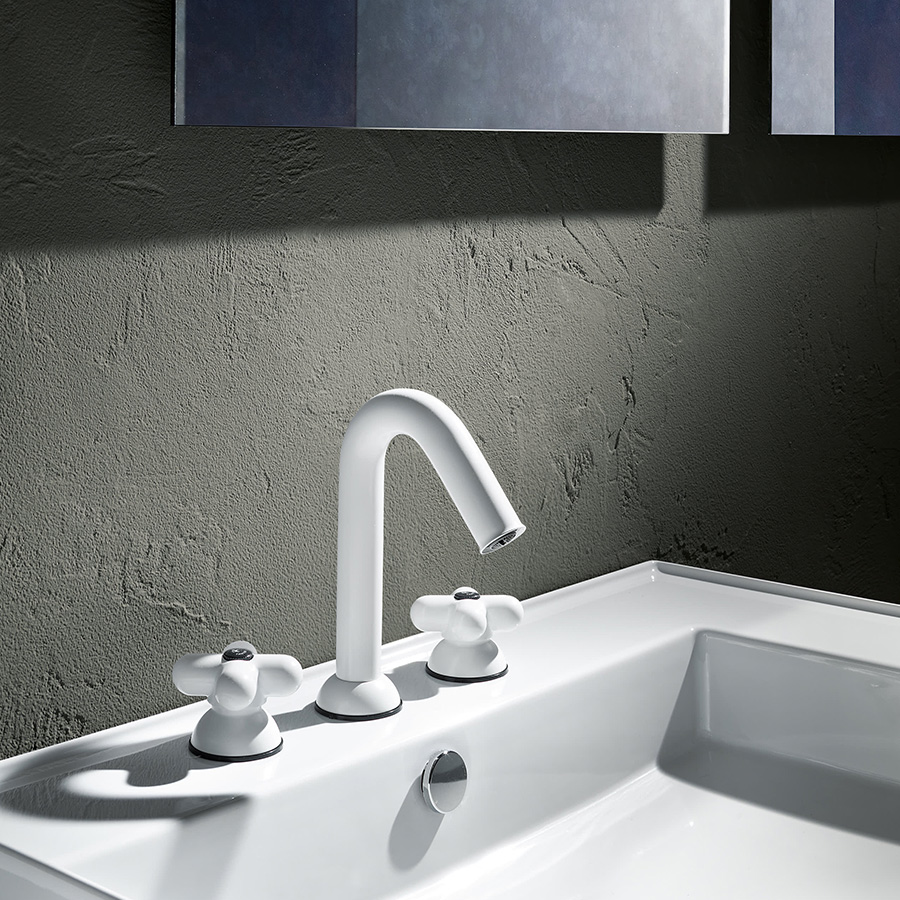 They are the icon of our company par excellence. Created in 1978, the first series of coloured taps meeting with enormous success on the market, they have Pop shapes and garish colours. Reissued in 2012, some details have been updated to make their image more contemporary. 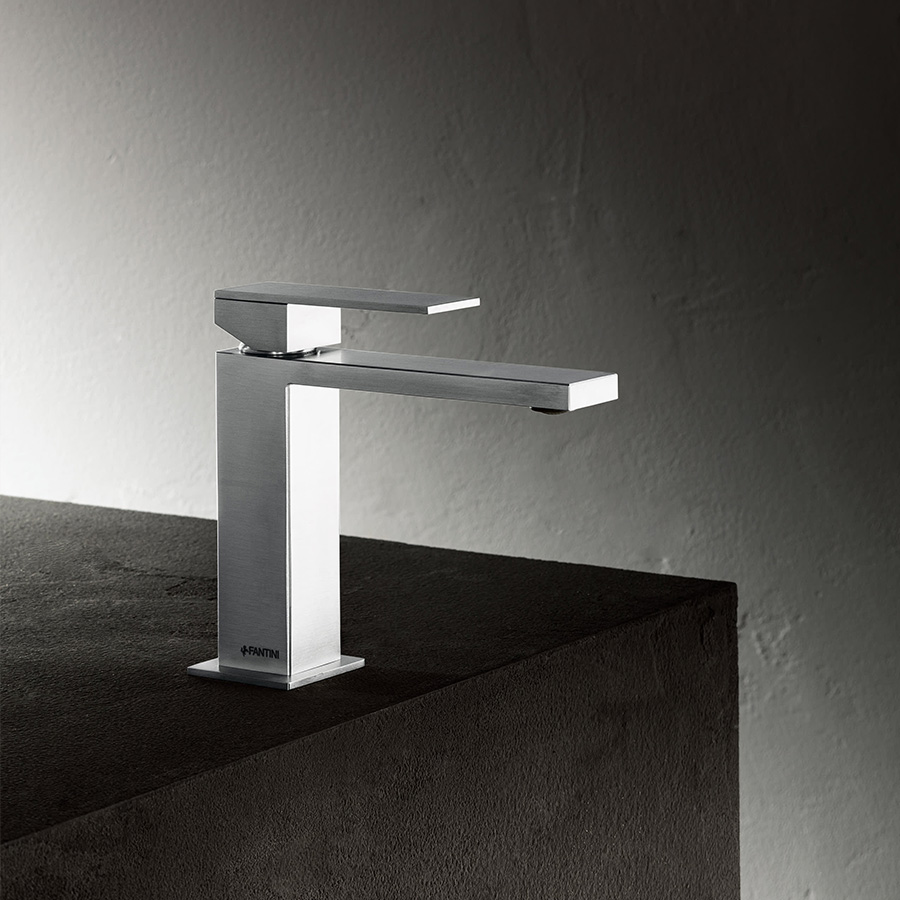 Characterised by a style inspired by primary, essential forms, it has a harmonious, balanced image, reassuring and very versatile, for all the styles of the contemporary bathroom. 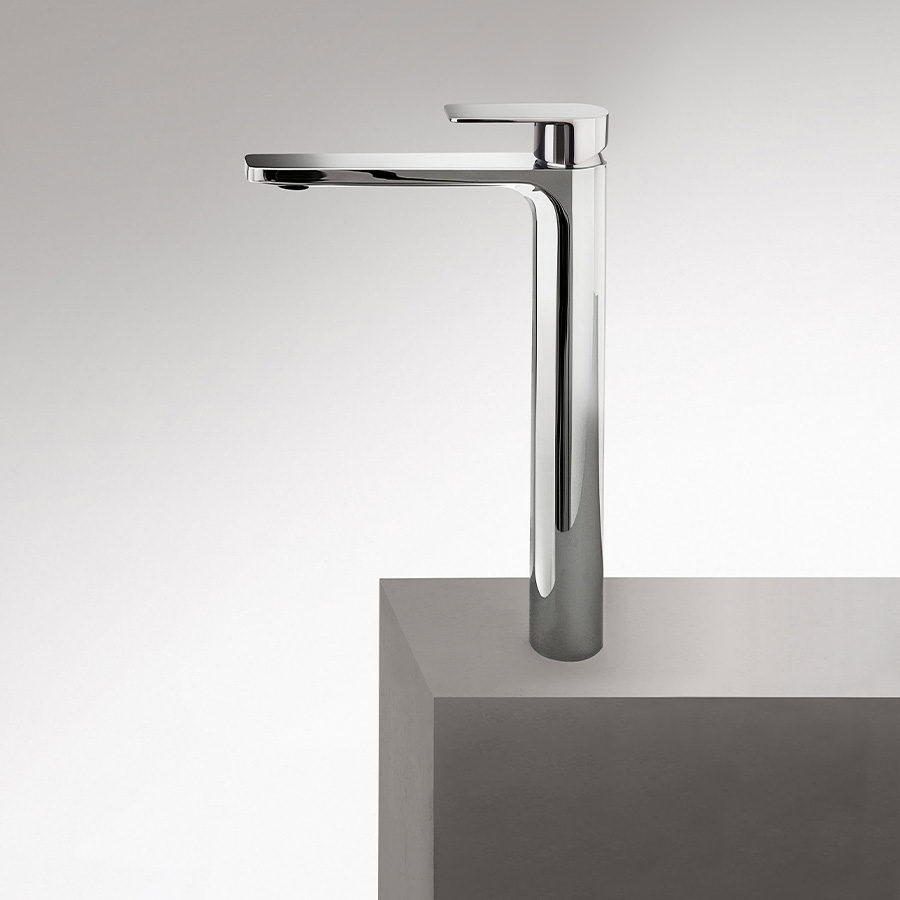 Myo is designed with a solid body featuring a sleek spout and thin handle, slightly curved in shape. These elements fit together thanks to its smooth design and harmonious proportions. The outcome is a versatile contemporary product available in both chrome and matt black. 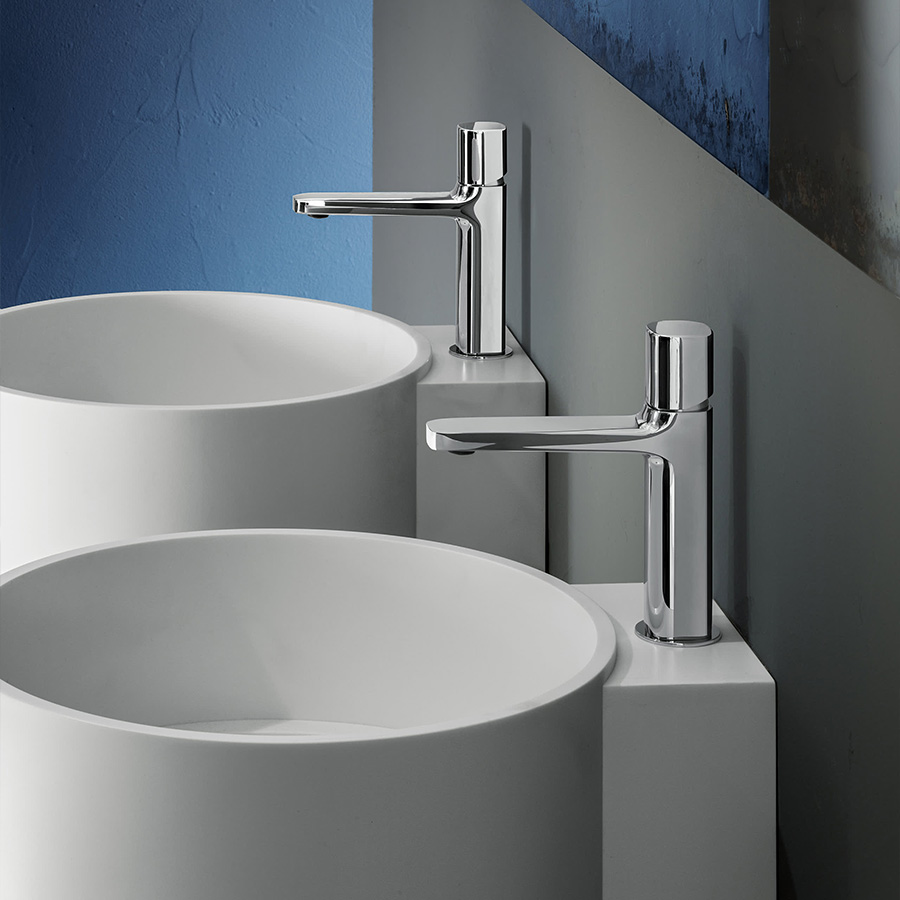 The rounded square section is inspired by the forms of the curvilinear coordinates and so-called super-ellipses that came about from the research of mathematician Gabriel Lamé. The product has simple, fluid forms that are ergonomic and pleasant to the touch. 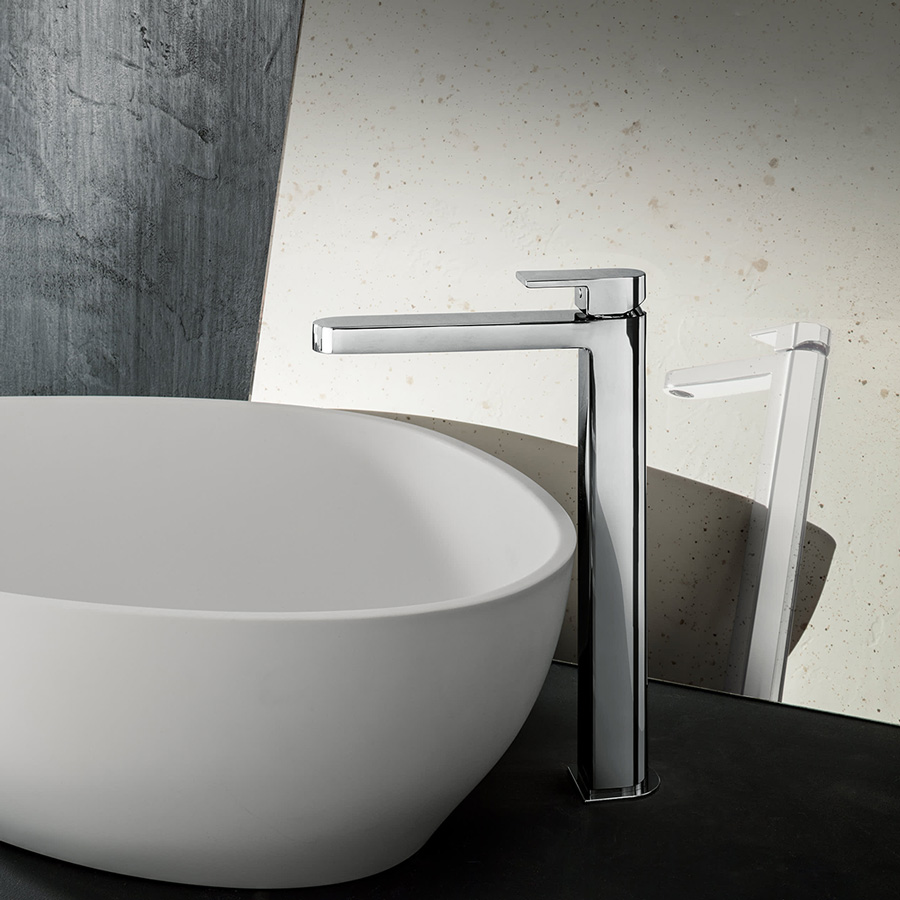 On the figurative level, each component of the Mare series is referable to the geometrical shape of the prism on an oval base. The result is elongated, rounded volumes that give the design originality. 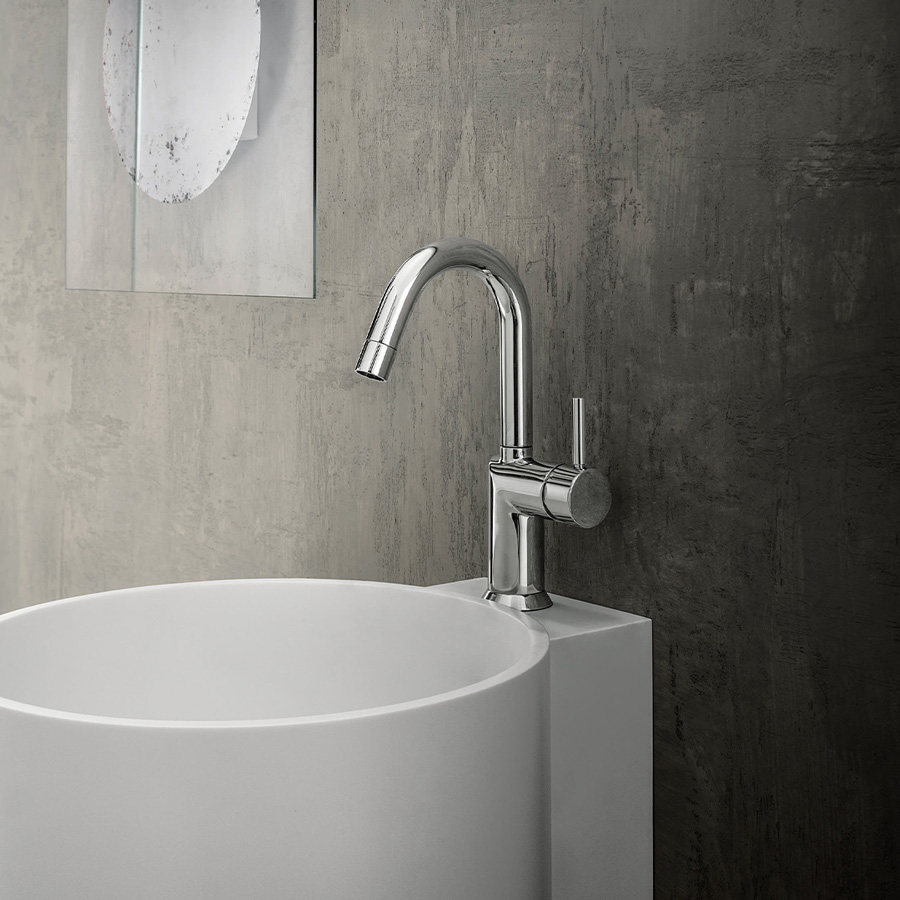 Aesthetically essential in the various expressions of its functional and formal elements, created with a subtraction of materials that translates into an immediate clarity of use. 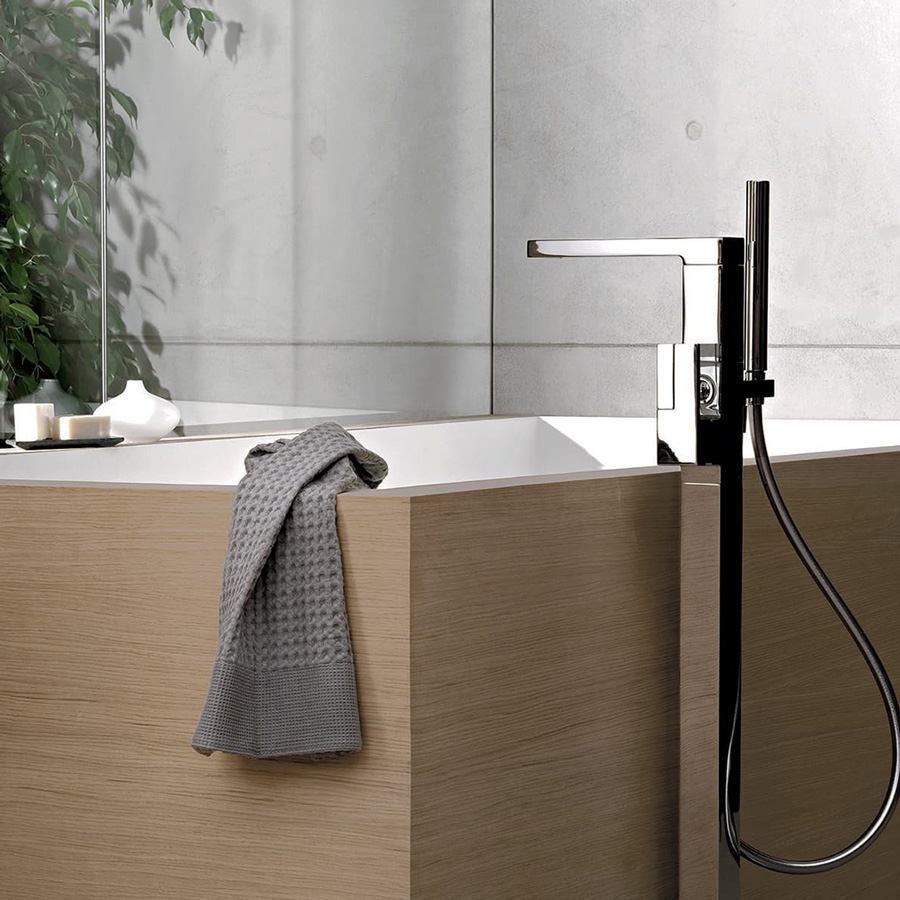 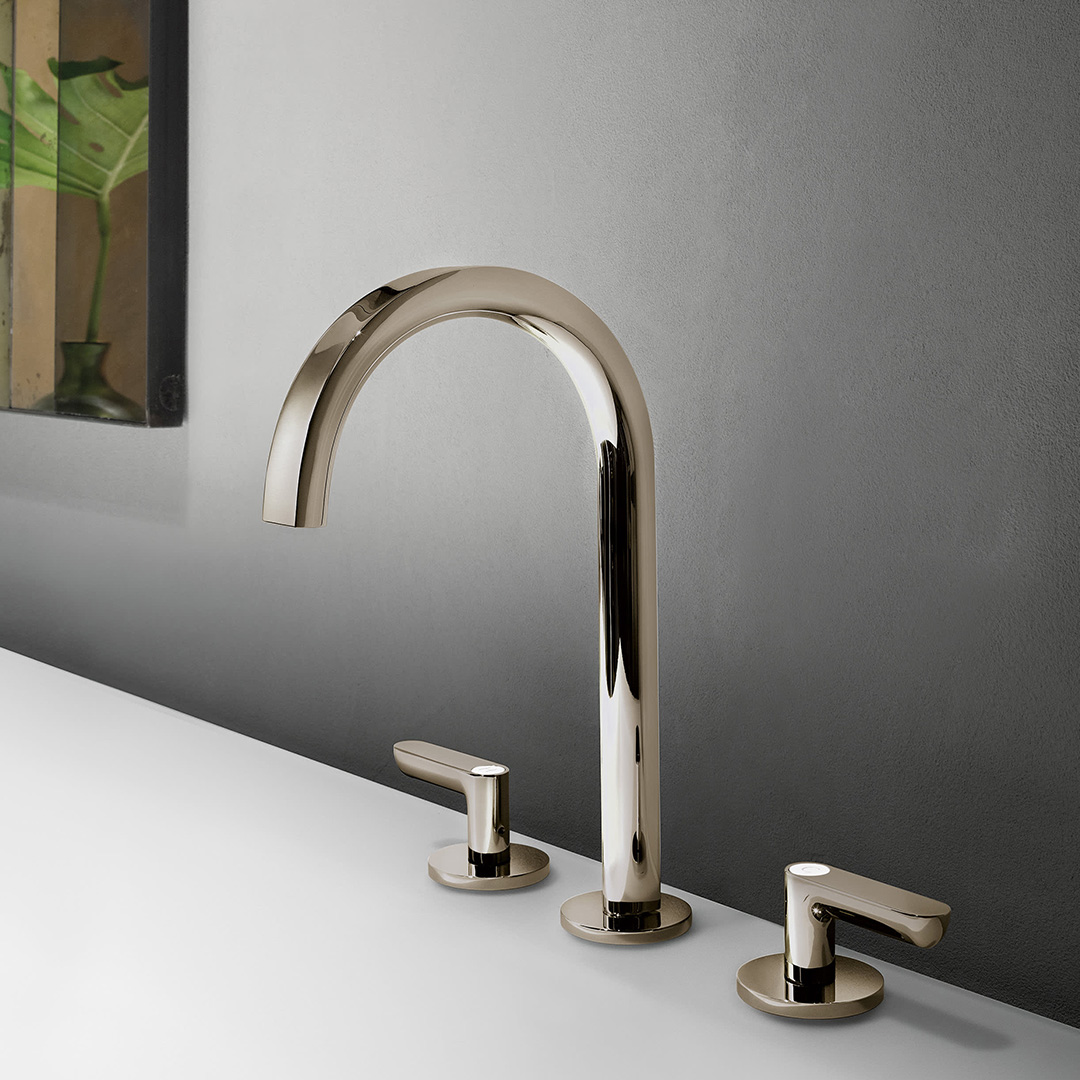 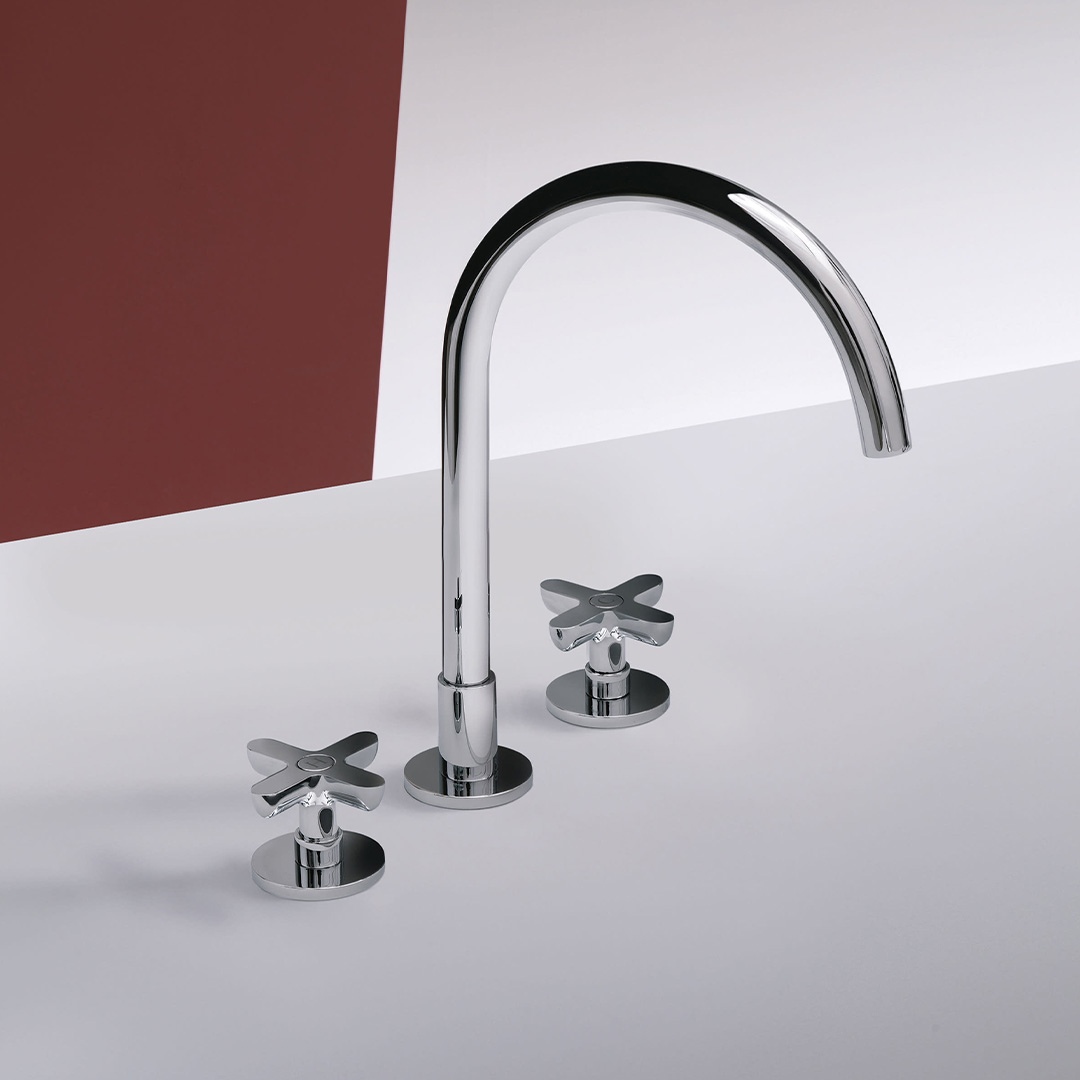 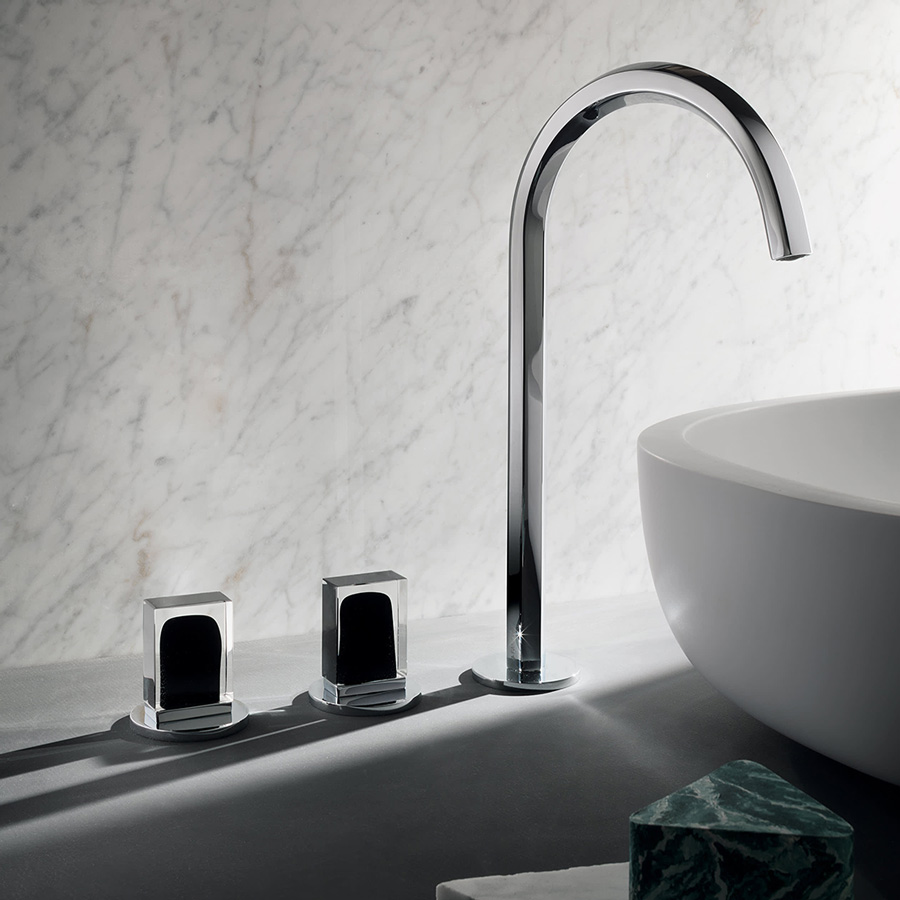 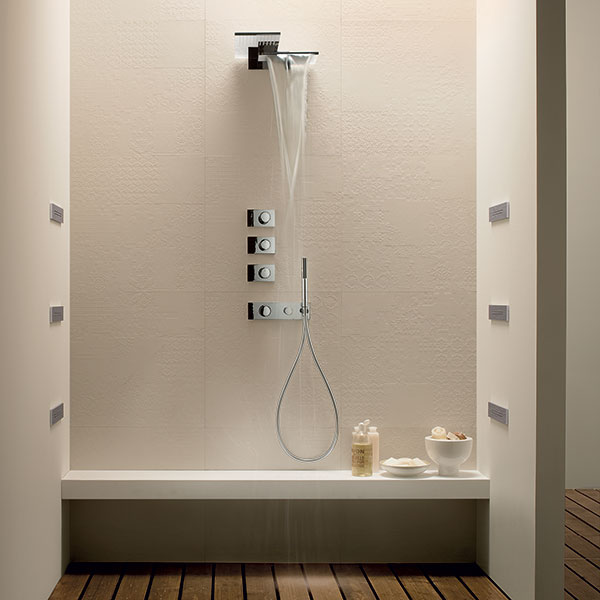 Thin, essential, absolute, this shower system is built on the 60 mm base module. A classic, well-established series in the company catalogue, MilanoSlim is a versatile series in its multiple applications. 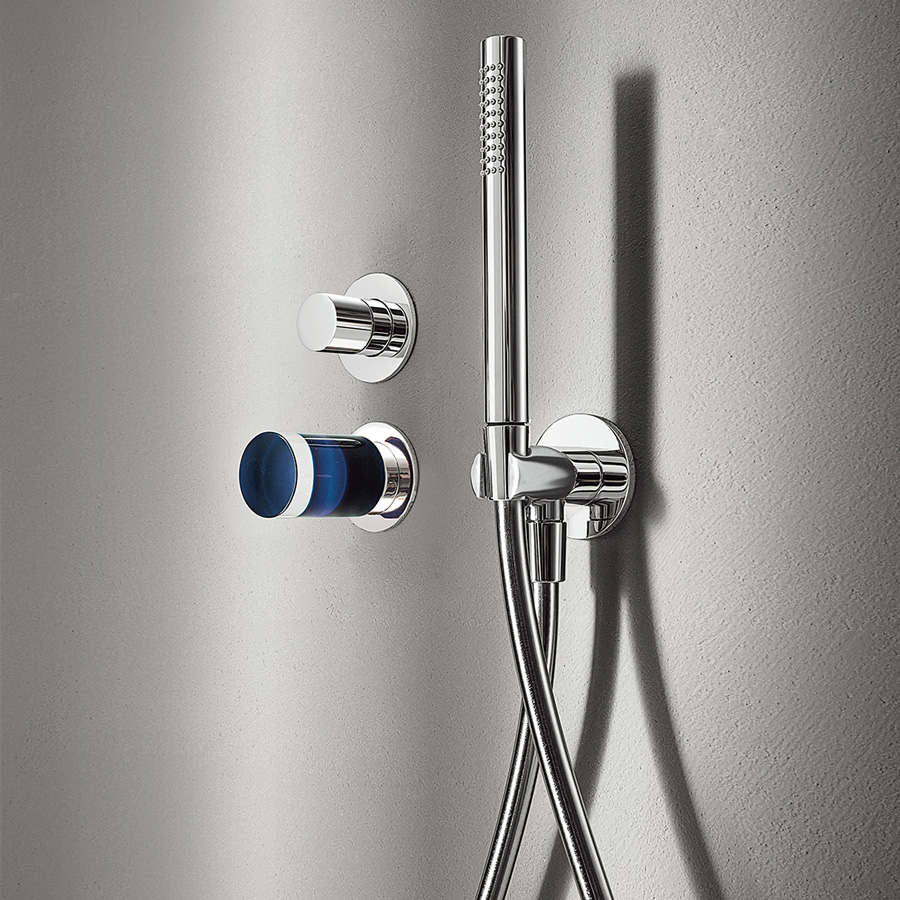 Nice, the joyful form of water, cheerful, transparent and colored. A tribute to the essence of water and its pure and precious beauty. An elegant and sophisticated project with sensual lines. 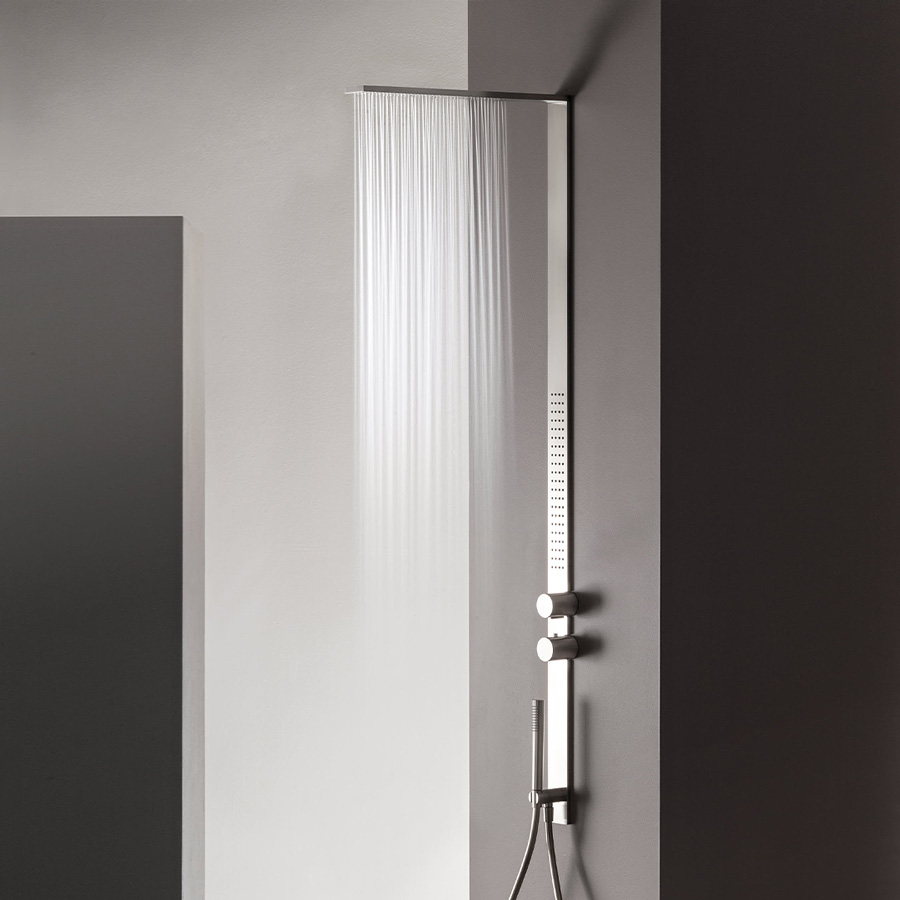 Thin, essential, absolute, this shower system is built on the 60 mm base module. A classic, well-established series in the company catalogue, MilanoSlim is a versatile series in its multiple applications. It also includes the Outdoor version.